Since 2011 Florian has been working with his partner Elissavet Aggou on a Korsakow project exploring the economic crisis in Greece, titled simply Money and the Greeks. The project includes several innovations, including a community-oriented process for viewing and voting on potential SNUs. There are also several outcomes, including interactive installations, an online Korsakow film, and a Korsakow Show involving a panel of experts and a studio audience. This project is being published in Greek and German, with French and English translations being planned.

The following transcript is from an interview with Leda Galanou for flix.gr, just before Florian’s Korsakow Show Was ist. geld.gr, which took place at the Goethe-Institut in Athens on October 22, 2012.

Why do you believe it is important that the viewer actively participates in an art project or a discussion of any kind, instead of simply listening to arguments or narrations?

Many brains are more intelligent than one brain. This is a simple fact. I very much believe that the answers to the questions, the solutions to the problems are already available. It is not one brilliant mind that knows and spits out the solution. It is the combined mind of the people that harbours the knowledge. But of course it is not an easy task to access this wisdom. In today’s media it is all about having a competition between different opinions to find the winner, as if this winner then knows what to do. We all have to participate, listen and share and take some of the responsibility. I try to use computers to visualize and enable us to understand multiple realities. In this endeavor the brains of the people are of crucial importance. I don’t want an audience that shuts up and listens. I want an audience that participates in the thinking process.

What are the cultural elements which Greeks and Germans have in common today; and those which separate them?

Among Germans and Greeks there are many different cultures. I myself grew up in the south of Germany, in Bavaria; my wife has Greek heritage and grew up in the north of Germany. People from the north of Germany are different from people in the south. Same goes for the west, the east, the center. There are 16 different states in Germany, each proud to have a different culture. So if you put all that together and say ‚this is German culture‘ what is the difference between German and Greek people? Well I would say: German people for a few years experienced a very strong economy, which seems to be good for building up confidence. Greek people experienced a very weak economy for the last couple of years. That makes the main difference. Greeks and Germans are both Europeans, that is what they have in common. 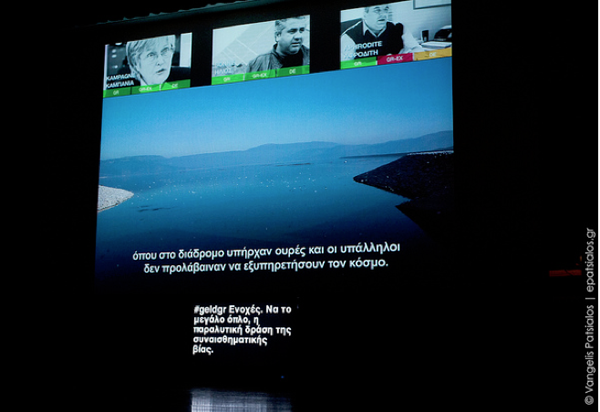 How would you describe the audience participation in a Korsakow Show, apart for the fact that they determine the subject of discussion?

Basically the subject of discussion is given. We will talk about ‚money and Greeks‘. There are video-clips (interviews and short narrations collected by me and my partner Elissavet in two trips across Greece) and there are two thinkers (Dionyssis Kavvathas from Greece and Claus Leggewie from Germany) on stage. These are the ingredients of the show. The ingredients were carefully picked (also with the help of hundreds of people who helped with preselecting the video-material) and now the audience is guiding the talk. They can vote which video-clip should be seen or which of the thinkers should be heard. The audience can comment on different levels. The show is like a cooking-pot, and the audience is the cook. There is not one message or goal other than maybe: „Think productively.“

What is it, in your opinion, that a Greek audience can gain from such an intimate communication with their German counterparts that they might not get from a conversation with the people of other countries in financial crisis, such as the Portuguese, Irish, or Spanish?

This show is not only for a Greek audience. We want to show it in Germany, France – maybe all over Europe. I hope that it helps to build a better understanding of each other, and brings cultural stereotypes more in sync with reality.

Could the Korsakow Show be described as a transmedia project, since it develops in multiple platforms simultaneously?

For many years I have used computers as my medium to create narrations or narrative projects. I grew up with computers and in my opinion it makes so much more sense, to use the logic and structure of computers to build narrations, than other usually much more linear and mono-dimensional formats. We are at the beginning of a new era of understanding and discussing the reality around us. Computers are crucial to discuss and understand this new level of complexity. This is beautiful, it is like entering a new world. I am experimenting with this new format. I don’t know what this format is called. For now, I call it ‚Korsakow‘.

What was your own impression from your journey in Greece last year, what kind of memories did you collect?

People are wonderful. Greece is beautiful. I am proud to be European. The rest is in the video-clips – come and see for yourself on Monday at the Goethe-Institut!

Click here for more photos from the Korsakow Show in Athens.